During my Master’s Degree Program at the University of North Texas (Denton), I was introduced to Play Therapy under the professorship of Dr. Garry Landreth, a leader in Child-Centered Play Therapy. At that juncture in my life, I knew I wanted to provide counseling to children, yet none of my classes had addressed the “how” in working with children in therapy.

When Dr. Landreth introduced the concept of “Play is a child’s language”- I felt like a door opened and a light shone brightly into my career as a children’s counselor. Initially, the technique of tracking (reflecting what the child is doing in the playroom) seemed redundant and awkward. However, as I transitioned to my internship and practicum at UNT’s Child and Family Center, the play therapy techniques became a natural part of my therapeutic process. Interestingly, the children’s responding behaviors reflected if I was tracking correctly…or not so correctly. My journey into the child’s world of play was fascinating.

Initially, I was skeptical that you could learn about the child’s inner world as part of the Play Therapy process- but I learned so much from these children. I recall one of my experiences in working with a young child whose mother had died suddenly. I recall losing patience with the process and asked my internship supervisor “How long am I going to have to watch him bury those toys in the sand?” Mind you, he had done the same play for about 8 sessions straight, as I sat in the corner of the playroom in a small chair tracking his play and reflecting content or feelings.

My supervisor quickly and sternly stated that this session was not about me but the client-the child leads (this is a major principle of child–centered play therapy). Well, about the tenth session, this child with the grief issues, began to engage in exploratory play (generally, this play occurs when the child first enters play therapy where they touch or engage with various toys in the playroom). In play-therapy, a change in play or themes is significant. Soon after, this child’s play therapy sessions ended when his father reported that the client appeared to have worked through this issue.

As I worked raising two children, life happened and my goal of pursuing credentialing as a play therapist got away from me. Fast forward a couple of decades and I am enrolled currently in a Graduate Play Therapy Certificate Program at the University of North Carolina at Charlotte. I am still finding the world of Play Therapy a fertile ground to learn ways to create a therapeutic alliance with children. I would encourage those of you who have not had the unique opportunity to take a seminar or a continuing education course in the area of play therapy, to go ahead and start learning a new therapeutic language.

(North Carolina), Licensed Professional Counselor (Virginia). She is currently employed at an

outpatient therapist at a non-profit agency. She enjoys working with children and her specialty is Play Therapy. 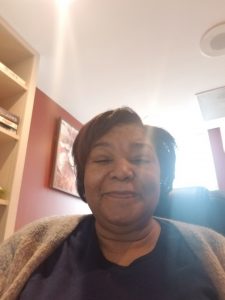